Caltech to Recognize and Celebrate the Naming of the Lee F. Browne Dining Hall

In the fall of 2021, Caltech announced the naming of several campus assets and honors for individuals who both reflect the Institute's values and aspirations and had a direct connection to and impact on the Caltech community.

Among those honorees were alumnus Grant D. Venerable (BS '32), for whom the Grant D. Venerable House, an undergraduate student residence, is now named; and longtime educator Lee Franke Browne, for whom the Lee F. Browne Dining Hall, Caltech's central dining facility, is now named. In October, Caltech held a public dedication of Venerable House; this week's dedication of Browne Dining Hall will provide another opportunity for the community to celebrate these individuals and to reflect on their contributions to the Institute.

Browne was a former Caltech employee and lecturer who dedicated his life and career to efforts that expanded students' understanding and appreciation of science, technology, engineering, and mathematics, and who advanced human rights. He joined the Caltech community in 1970 as the Institute's director of secondary school relations and special student programs; he retired in 1990 as a lecturer in education, emeritus. During his two decades at the Institute, Browne created and fostered several local outreach programs to expand resources for STEM teaching and tutoring, while also supporting Caltech's undergraduate student recruitment efforts and encouraging students from underrepresented backgrounds to pursue careers in science and to consider the Institute as an option for their education.

Browne was initially recruited to Caltech by several faculty members from the Institute who had learned of his effectiveness in engaging Pasadena high school students in the sciences. Browne taught chemistry at Muir High School from 1958 to 1964, and then at Blair High School, where he served as science department chairman from 1964 to 1969. He also served as a science consultant for the Pasadena Unified School District at large. Prior to moving to Pasadena in the 1950s, Browne taught for several years at the Tuskegee Institute in Alabama, and later, at a junior college in the San Fernando Valley.

Browne's contributions to Caltech and the Pasadena community extended beyond his role as an educator and scholar. He was elected in 1979 as the California statewide chairman of MESA (Mathematics, Engineering, and Science Achievement), a group that helps underserved students achieve success in STEM studies and careers. In 1983, he received the Congressional Distinguished Service Award for his outstanding service to the community. Browne was a founding member of the Pasadena Eagle newspaper, was active with the National Association for the Advancement of Colored People (NAACP), and served and held memberships with many community organizations, including the National Action Council for Minorities in Engineering, the National Society of Black Engineers, the National Science Teaching Association, and the Phi Delta Kappa Fraternity. He passed away in 2010.

The dedication of the Grant D. Venerable House took place on the Olive Walk on Caltech's Pasadena campus on Friday, October 21, 2022. The event included a brief program with remarks from Caltech president Thomas F. Rosenbaum, members of the Venerable family, and campus leaders.

Venerable, the first Black undergraduate student to graduate from Caltech, was an active student leader and athlete during his time on campus. In 1929, Venerable, of African, Cherokee, and Scottish descent, entered Caltech as a transfer student from the mathematics department at UCLA. During his time at Caltech, he was involved in several professional and social groups across campus, including the YMCA (now the Caltech Y), the American Society of Civil Engineers, the track team, and the Exhibit Day committee. He wrote for the Caltech student newspaper, The Tech, from 1929 to 1932. Venerable also served as president of Caltech's Cosmopolitan Club, which was formed in 1925 to promote fellowship among students of different nationalities.

Venerable graduated during the Great Depression and, like most of his classmates, was unable to find employment in engineering and science. He worked for several years at the Golden State Mutual Life Insurance Company of Los Angeles, one of two Black-owned insurance companies west of the Mississippi, followed by several mining engineering projects in Death Valley. Continuing to live in Los Angeles, Venerable bought a hotel, which he operated with his brother-in-law. He later bought, managed, and operated the George R. Venerable Healey Manufacturing Company, which produced and distributed chalkboard erasers for major school districts across the country, until his death in 1986.

Both of these dedications are the culmination of the hard work of many Caltech students, faculty, staff, alumni, and others who came together to reflect on and deliberate about Caltech's past and to help chart a future that reflects and supports the Institute's continuing commitment to cultivate a thriving, supportive, and inclusive community of scholars. 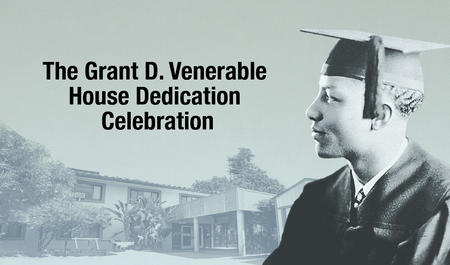