PASADENA—Arden Albee is often asked how it felt to lose the Mars Observer.

Albee was project scientist of the ill-fated space probe that somehow lost its way in the depths of space in 1993. On its final approach to Mars, scientists lost contact and never heard or saw anything of the spacecraft again. To this day, neither Albee nor anyone else is certain what happened.

"Our suspicion is that, in the process of pressurization, there was a rupture in the lines that set it spinning," says Albee, a professor of geology and planetary science at the California Institute of Technology and longtime collaborator on Jet Propulsion Laboratory planetary missions.

"Mars Observer probably didn't blow up, but we were never able to figure out where it might be because we didn't know if it got captured by Mars," he says. "If it did, then it could be in a Martian orbit; if not, then it's in a sun orbit. But we searched for it in both orbits without luck."

The loss was extremely disappointing to the planetary science community. Had Mars Observer been successful, the spacecraft would have mapped the surface of the Red Planet and sent back a huge amount of data—far more data than had ever been sent back from Mars by all interplanetary probes combined, since the advent of the space program.

Certainly, many scientists would have been in despair after seeing two decades of their life's work evaporate. But Albee in particular and NASA scientists in general are different.

"When we lost Mars Observer, we were so busy putting together the pieces that we didn't really have time to get overly depressed," he says. "For one thing, we weren't immediately sure that the mission was permanently lost. And also, the next launch opportunity was the next fall, so the question was immediately whether we could recover in time to launch another spacecraft during that opportunity.

"There was a fair amount of despair, obviously, but we had a lot of other things to do."

As it turned out, Albee and the hundreds of other scientists, engineers, technicians, and support staff who worked on Observer decided against launching again in 1994. But another window of opportunity opened in December 1996, and this time they were ready with Mars Global Surveyor.

Albee was named project scientist of Global Surveyor, and out of the spare parts of the ill-fated Observer mission came the beginnings of a more compact, more cost-effective mission that has already brought back a tremendous amount of scientific data. In fact, by the time the mission is completed in a couple of years, Global Surveyor will fulfill Observer's original promise of returning more planetary data than all the other missions to date combined.

The Mars Global Surveyor mission, like the highly visible Pathfinder mission of 1997, is an embodiment of the new NASA mantra "faster, better, cheaper." About a ton in weight and the size of an office desk, the Global Surveyor orbiter is bigger than the little Pathfinder rover that so captured the public's imagination on Independence Day 1997. But Global Surveyor is designed to send back vastly more data and perform considerably more science over a much longer period of time.

Very soon after the spacecraft went into Martian orbit, Global Surveyor captured, for the first time, the start of a major dust storm on Mars and followed it through its development and demise.

This and other early accomplishments came at a time when Global Surveyor personnel were undoubtedly feeling a nauseating sense of déjà vu. Early on, the spacecraft developed a glitch when it first began tightening up its orbit.

Global Surveyor, to be "faster, better, cheaper," had been set on a course that took it initially into a huge sweeping elliptical orbit of Mars. On its near approach in each orbit, the probe was to dip into the upper atmosphere of Mars in a maneuver known as aerobraking, which would effectively slow the probe down and eventually place it into a near-circular orbit. But a solar-panel damper failed early in the mission, and damage to the solar panel forced the team to slow down the rate of the aerobraking, and the actual mapping mission only got under way this year.

A couple of other annoying glitches have come and gone, including an antenna stoppage a few weeks ago, and a burn that didn't work quite right. But all in all, Global Surveyor has already turned out to be a very good consolation for those who would have benefited from the data returned by Observer.

The Mars Global Surveyor team announced early in the mission that the on-board magnetometer shows Mars to have a more complex magnetic field than once thought. But results published earlier this year showed that Mars once had a magnetic field even stronger than that of Earth.

This is important because many scientists think a strong magnetic field may be crucial for the evolution of life on a planet, because without it the surface is constantly bathed in strong radiation that would kill most life forms that we know of. Moreover, atmospheric constituents like oxygen and water tend to be "sputtered" away by the solar wind and cosmic rays.

The magnetometer has also recently shown the presence of magnetic stripes that show similarities to stripes that occur on the ocean floor on Earth. It is tempting to conclude that their origin was similar, but this is not yet certain.

The mapping mission is working so well that scientists not only have new knowledge about the surface of Mars, but also vastly improved meteorological understanding. The instruments are monitoring water-ice clouds, carbon dioxide clouds, and dust storms—all highly variable and localized atmospheric phenomena.

Further, the knowledge obtained about Martian weather could perhaps even provide new insights on the nature of weather on Earth.

"At this point, we basically know the topography of Mars, in a sense, better than we know that of the continents of Earth," Albee says.

The basic shape is that of a triaxial ellipsoid with the topography imposed upon it.

Whatever the remaining two years hold for Global Surveyor, Albee says this is probably his last space mission. A Caltech professor since 1959, Albee was originally a geologist, but got involved in space exploration while investigating the lunar samples returned by the Apollo missions of the late 1960s and early 1970s.

Albee got more and more involved in planetary science as time went on. He was involved in the Viking mission to Mars toward its end in the mid-1970s, and in 1978 was named chief scientist at the Jet Propulsion Laboratory. He served until 1984, when he became Caltech's dean of graduate studies—a position he holds to this day, in addition to his ongoing work as a JPL project scientist and a Caltech professor.

"I think I'll let the new generation go back to Mars," he says, adding that the future promise of breakthroughs such as extraterrestrial sample returns will provide strong motivation for his successors.

As for his unflappable demeanor during the Mars Observer loss, Albee sums it all up in a single sentence: 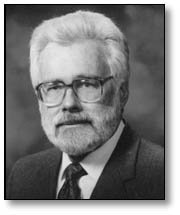